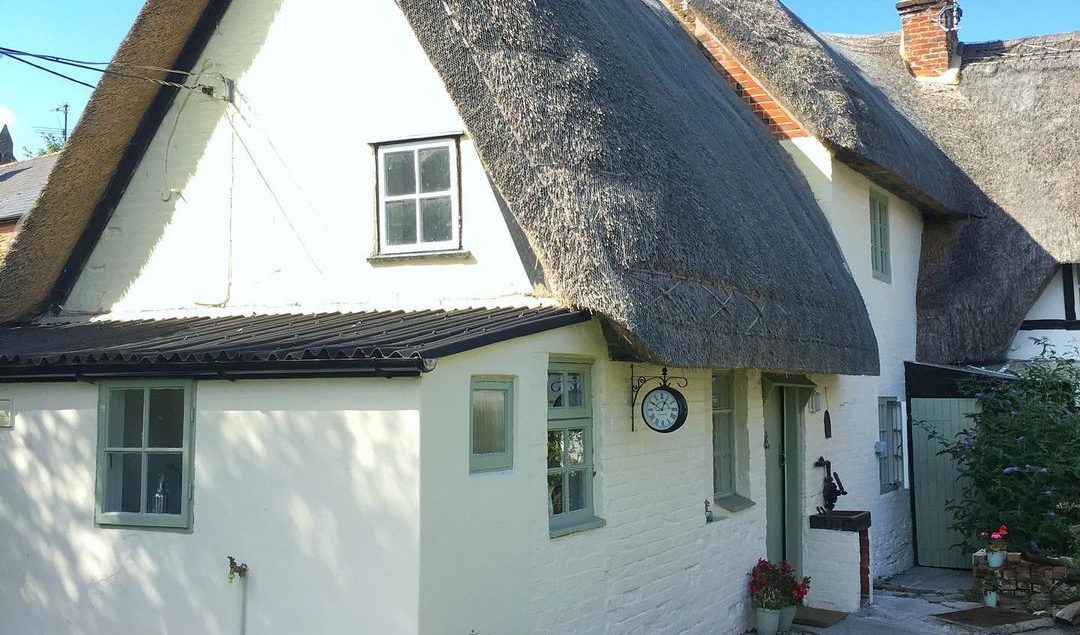 I love a house that has many stories to tell, and I’m sure our cottage does, I just wish it could share them all with me

Drooling over this perfect thatched cottage with it’s quaint roof, beautiful old brickwork and frankly gorgeous windows of please peep inside, one wonders why Paula Bailey was unable to swoon and fall immediately in love with this treasure pot. The cottage hadn’t been lived in for three years so it was very difficult to imagine inhabiting it and making it a home, thankfully her husband Steve was able to look beyond the empty, deserted cottage and could see the potential in the building.

As you can see from this beautifully enticing view into the dining room, Paula is a creative, visual person so struggled to see how the dark beams and haphazard rooms could be transformed into a beautiful country idyll. She put her trust in Steve’s vision and as soon as they had begun to furnish the rooms she felt instantly at home.

The cottage is over 300 years old and is believed to have once been a weavers cottage. It was originally called ’The Cottage’ but somewhere along the years – presumably as other cottages grew up around it – it was changed to a straight forward house number. The couple were lucky enough to inherit a lot of old house deeds from the previous owners, the earliest of which is dated 1864 when the cottage was bought by Simon Sloper for £55. Simon died in 1875 and the cottage was left to his eldest son John who left it to his daughter Eliza who eventually sold it on in 1929 for £1050. The Cottage is a stones throw away from the village graveyard where Paula discovered both Simon and John had been buried.

The biggest job we have tackled is lightening the beams in the kitchen and mezzanine area from black to oak. We used a specialist company who use a special painting technique. So no sand blasting and no mess. It was well worth the investment. We also painted the exterior walls, window frames and doors in cream and sage green to give the cottage a more homely feel.

A lot of the major work was done to the cottage by the previous owners but because it hadn’t been lived in for such a long time, there were some issues that needed tackling when Paula and Steve moved in.

The couple used some of their furniture from their previous house as a starting point for decorating the cottage. Finding sofas for the narrow living room that weren’t too bulky proved difficult, Steve and Paula both dreamed of a gorgeous Chesterfield style which was sadly too big for the room. Eventually they found a slimmer version of a Chesterfield in Next Home. Paula’s Country Cottage Necessity has to be the Logburner: “Old cottages can lose heat quickly in the winter so our log burner has been a god send during the cold winter months“.

I really like rooms to have a common theme so gradually started adding pink and green throughout the house. Every room has a combination of either grey, pink or green.

Paula doesn’t ascribe to a style or trend: “I usually start with one item I really like whether it be a piece of furniture or a picture and I add pieces to suit from there. I love a bargain and will spend ages browsing second hand shops, markets and online selling sites”.

Paula and Steve began working on the garden last year. There were lots of overgrown flowerbeds and hedges which needed plenty of attention. They have added a new seating area and this year plan to add lots of climbers including clematis and pink roses.

When describing her dream home Paula rhapsodises “I love old homes with character and charm. As well as quirky cottages I am drawn to old Georgian houses. I think the architecture is just stunning and I love the external symmetry and grand styling inside. A lovely Georgian manor house would be right up my street, but I would definitely need a lottery win to afford one!”