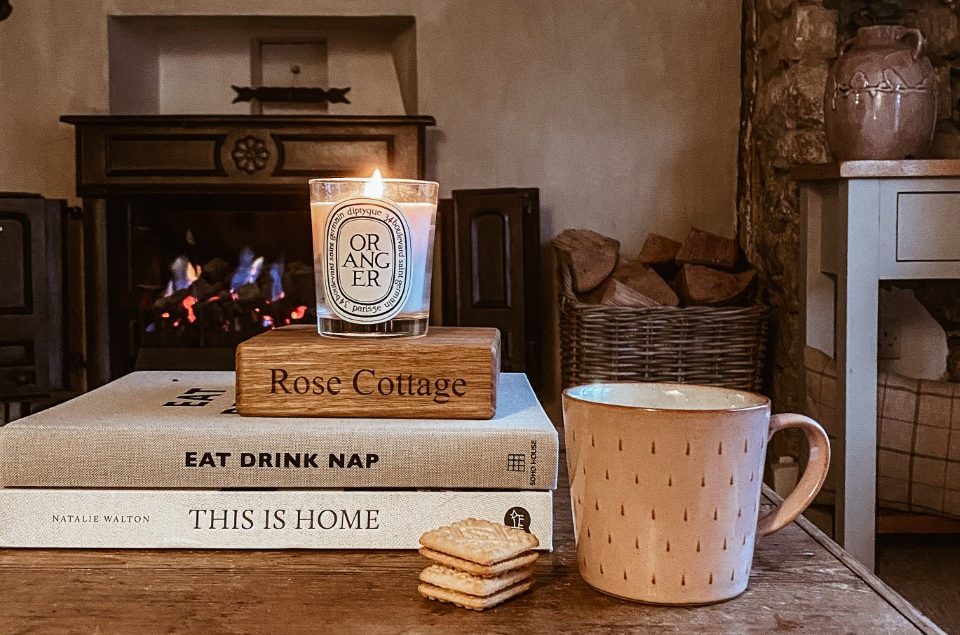 Yes it’s ANOTHER thatch! I promise this new series won’t all be thatched cottages but this is such a gorgeous little cottage that has been beautifully brought back to life and has a planning officer pleasing modern glass extension that fills the cottage with sunshine and warmth.

Kerrie, her husband Bugzy and their Bichon Frisè Mac moved into Rose Cottage 3 years ago and have totally transformed a dated 1950’s extended cottage into a cosy modern light filled cottage filled with ancient beams and character.

The cottage was built about 1711 as a tenant cottage to ‘the big house’ next door. It originally consisted of 3 rooms, 2 down, 1 up, and was built mostly of Cotswold stone that was quarried from the hill above.

The biggest change that the couple have made has been the modern extension. They had hoped to be allowed to build a new kitchen, but the conservation officer insisted that all the old 1950’s additions had to come down, which made it a much bigger project than Kerrie and her husband had originally intended. They demolished the old garage, bathroom, utility and conservatory, and built a separate block, with kitchen diner downstairs, bedroom suite upstairs, and a glass link which connects the old and the new and contains a bathroom.

When the builders finished, we were left with a bare shell, we have had to insulate, plaster, decorate, power and plumb and fit two bathrooms. Most of the extension is completed now apart from the actual kitchen units.

Kerry and Bugzy discussed the new extension with their architect and aware that conservation officers are now “firmly in the delineation camp following the sometime horrendous mock historic extensions of previous decades”, they deliberately wanted the to cottage to look as though it was standing alone, with the modern extension set back as far as possible. The conservation officer was in immediate agreement!

Aside from the actual kitchen units, most of the extension is now complete. In the old part of the cottage the couple have decorated the upstairs and fitted new radiators throughout.

One of the most important ingredients when creating a country cottage look is a fireplace! Historic glazing isn’t all that effective, so a good fire is an essential as well as adding to the cottage charm. If the cottage is thatched, several fire extinguishers are normally an insurance necessity. I also think a dog is the most important addition to any country cottage, they make a house a home.

Kerrie planned the design of the cottage to carefully blend the old and the new. “The original half of the cottage was always very straightforward, it has so many wonderful original features and textures: the beams, the Cotswold stone, even the old plasterwork. All these elements needed to be the highlight, keeping everything else a traditional white so that it was very organic.

Kerrie found the first few months of the renovation very difficult: “I panicked a lot about what we had taken on, living in a cottage was so different to a modern house, and there were several tears and wobbles about it but I truly fell in love with the house when I was stripping the paint off the door frame in the bedroom and I found a hexafoil or ‘witches mark’ carved into it. That was the moment I realised what a privilege it was to own a historic house, and that it was now our responsibility to take care of it”.

The discovery of the Hexafoil was a physical connection to the original owners of this cottage. A window on a persons beliefs and fears. It was a weirdly personal and emotional find.

These marks were common up to the middle of the 18th century. The occupiers would carve them over openings, doorways, windows and chimneys, in order to prevent evil spirits from entering the home. This particular one is known as a daisy wheel hexafoil, it’s a continuous line with no breaks, supposedly to trap the spirit within the never ending lines.

Decorating the new extension proved trickier, Kerrie wanted to be sympathetic to the original cottage, but also wanted the contrast of the old and new, so it required more thought and planning. She drew most of her inspiration from local Cotswold hotels, primarily The Fish Hotel at Broadway where the interiors were designed by Hannah Lohan. “I love their laid back country feel, it feels indulgent and luxurious at the same time as having that rural country feel.”

Kerrie and Bugzy have worked incredibly hard to create this serene and tranquil haven, to seamlessly blend the old with the new. When asked what her dream home would be, Kerrie replied “I’m in it! It would just be nice if it was finished, and if we could tack 4 acres of land on to the garden!”. Thank goodness Rose cottage was the house for them, this gorgeous couple have devoted so much thought and time and love to this ancient home which shines through in every nook and cranny.

Read more about this beautiful renovation at: