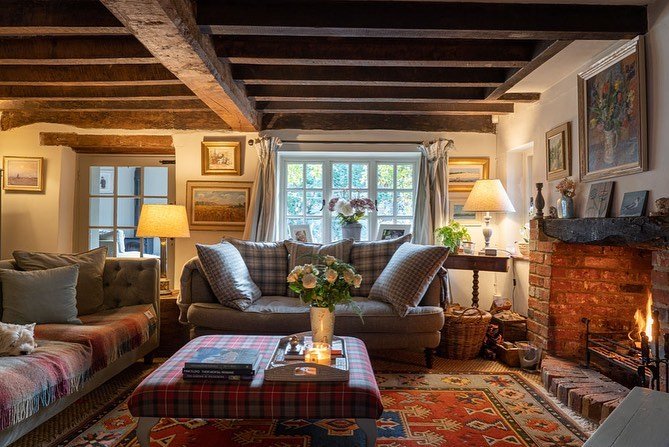 Wincing a little as I walked though the kitchen I entered the heavily beamed sitting room with its huge open fireplace and instantly fell in love. A week later, having convinced my husband this was our next move, we took the children to see it. They charged around the large garden, with its fruits trees and views out to the open fields, and I knew this was it

During lockdown, portrait photographer Janie Critchley was forced to put her work on hold so turned her lens onto her beautiful Berkshire home and began to take photos of this stunning 1600’s old forge cottage. Janie and her husband David have lived in the cottage since 2002 and have watched their children grow up in those beautiful fields and gorgeous garden that first captured their hearts. Turning the camera onto her own home has brought a renewed love for her comforting old cottage which just shines out from every gorgeous image.

The house dates back to the 1600’s. It was referred to as “a dwelling” originally occupied by the village blacksmith and his family in the 1800’s. It remained a village blacksmiths’ cottage up until the 1930’s, rather wonderfully one elderly resident of the village recalls one winter seeing the horses queuing outside the cottage and down the street waiting for their ice shoes to be fitted by the blacksmith! At some point in time the plot became two cottages, with the newer addition named Graggs Cottage but was converted to one large cottage post war.

One of the many charms of this cottage is all the extras that it has received over the centuries. The kitchen is Janie and David’s contribution to a long line of cottage dwellers adapting the house to work for them:

The unique aspect of this cottage is that is a mixture of ages: the 1600’s old cottage, the Victorian extension, the 1940’s annexe, 1980’s single story and the kitchen single story (that we added). So there is a whole mix of styles….and about twenty different styles of door!

The 1980’s single story extension was rather soulless when the family moved in so Janie used this as an opportunity to introduce a New England meets English Country House feel to the cottage. She added tongue and groove panelling to the walls, cleaned up the wooden floor, added a huge wall to wall bookcase, a wood burning stove and bifold doors
to the garden. This is one of her favourite rooms in both summer and winter, particularly in the summer when the doors are wide open to the South-West facing garden, the perfect view of the sunset.

Despite the cottage being a little tired when the family moved in, the original features were intact and the walls and carpets were fairly neutral. They sensibly lived in it for 6 months and then began to work on sections of the house room by room. The first step was to take down a partition wall at the top of the stairs which had been used to make an extra bedroom, subsequently opening up the whole are into a landing. This area is heavily beamed so it was an absolute must for them to expose these and create a beautiful space.

There was one huge room off the above hallway which was too big for one child so they divided the room into two separate bedrooms. The ceiling was lowered to make it more cosy and to add storage space but now that the children have grown up – their youngest daughter Isabelle (23) is still at home but Molly 28 and Alex 27 have moved to london – Janie regrets reducing the ceiling height as both rooms would have had a huge area, reaching up to the roof which would be very beautiful.

Janie says that her style has definitely happened organically over time: “Twenty years and counting! It is quite a large floor space and a very strange layout, so for me it would have been impossible to plan any decoration all in one go as it was such a hotch potch of rooms. Planning a colour scheme, choosing furniture, rugs and decorative items whilst pouring over books and magazines to style a room is probably one of my favourite things to do…but gradually! Twenty years ago I had three young children and I had just started up my photography business so life was busy. I prefer it when rooms just evolve”. This cottage is testament to allowing interior decoration to evolve, it is almost impossible to create a beautiful home that feels lived in and loved straight off the bat. Homes need items with memories and significance to create something special. Interiors need layers that even the very bestest ever in the world designer struggles to create in one sitting. Interestingly, when looking at Janie’s rooms she has used the same pallette and tones throughout with the classic combination of light blue, muted greens and red, and incorporating antique rugs, squashy sofas, rustic pots and textured natural carpets.

Janie doesn’t ascribe to a specific design style, she sensibly thinks that “A house this old, with all its nooks and crannies, old beams and crumbing walls would be very hard to have that cool, pared-back look with lots of off white and grey. I also am not naturally tidy… So I’ve just embraced the busy, chaotic look which I like to describe as “homely” and “cosy”! Last year I redecorated several rooms and have definitely become braver with my choice of wall colour. The darker colours and wall papers are a great backdrop for my wall art and photographs (and there are quite a lot of those). And I try not to over think if patterns and colours clashes…they probably don’t and if they do it might just be a question of getting used to it.” I think it is this ‘clash’ that provides the cosy inviting feel and helps to create the English country home look that is increasing in popularity at the moment. Home owners are seeking comfort in their houses and filling a home with texture, colour and layers creates a wonderfully cossetting atmosphere.

One of the influential designers of the Country House look is Rita Konig whose work Janie admires greatly: “I heard Rita speak at a Homes and Garden event, when she was describing her farm house in County Durham. I thought at the time the house looked and sounded just perfect…comfy fabrics, old inherited pieces of furniture, old bookcases, rugs, throws etc. Heaven!” https://ritakonig.com/interiors/

The other designer Janie adores is Matilda Goud: “I love her use of colour and her quirky, vintage accessories. I tend to sneak one or two of her pieces on to my Christmas and birthday list!”.

Janie’s favourite interiors books include “At Home in the English Countryside: Designers and their Dogs” by Susanna Salk “which probably sums up all my favourite things”as well as the much loved Farrow and Ball books (“How to Decorate” is her favourite)

As with so many of our cottage owners (me included!), Janie’s dream home would be a light filled Georgian country house in Cornwall, with floor to ceiling windows in the sitting room and a huge kitchen looking out over a beautiful garden, with the sea in the distance. Failing that she says: “I’m already here. This is my forever home”.

To see more of Janie’s home and work head to her Instagram page: https://www.instagram.com/janiecritchleyphotography/

Rebecca Lovattreply
– In reply to: Karen