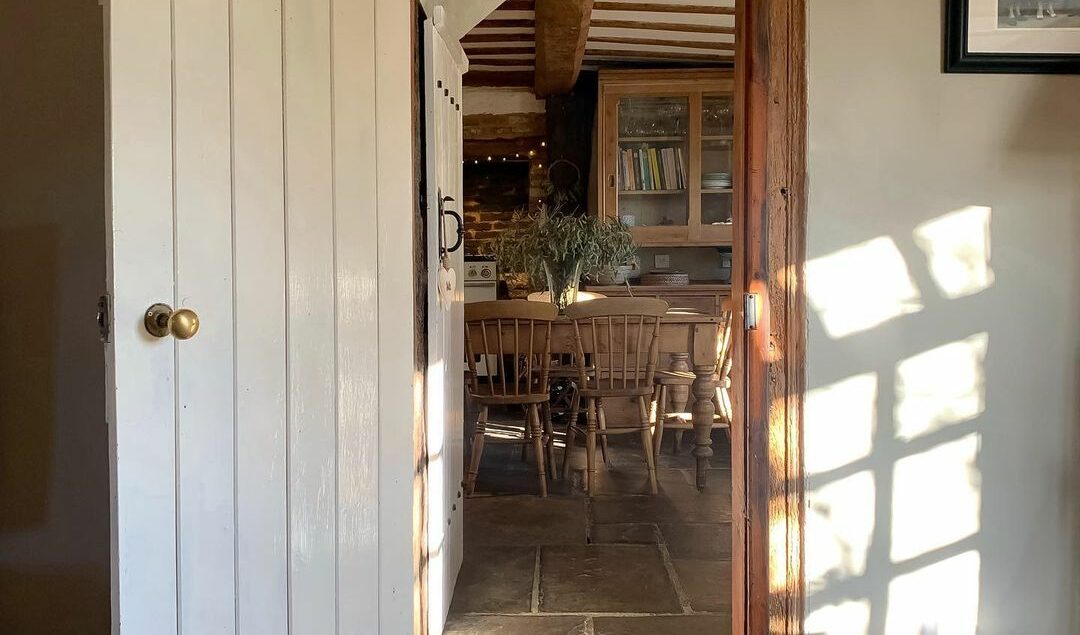 It’s true what they say, old houses really do wrap their arms around you and seem to ooze appreciation for anyone that shows them love and respect

Lizzie and her partner Steve had been renting for years when their last rental led them to a very pretty village on the Norfolk/Suffolk borders. Every day Lizzie would pass a beautiful old cottage and whisper to herself “one day, I’m going to live in that cottage”! She adored everything about it and fell hook line and sinker for this centuries old cottage. Eventually the property came up to rent but the cost was too high and the devastated couple missed out. Thankfully fate and prudence stepped in: Steve was posted away for work and they gave up their rental to save for a house, eventually, after months of property searches, the cottage popped up on Rightmove and Lizzie rushed to view the property.

Sadly, when Lizzie viewed the cottage it was not the fairy tale entrance that she had dreamed of for so many years… in fact, Lizzie informed Steve that it wasn’t the cottage for them. At this point fate stepped in and weeks passed but nothing else came onto the market, so the couple arranged a second viewing.

It was October and the cottage was dark, cold and miserable. It had been empty for a long time and the last occupants had not cared for the cottage in the way that it deserved, the garden was overgrown and muddy, there were damp patches, crumbling parts, peeling parts, cracks and all manner of other ‘Oh my God’ finds. But, we decided to take a punt and get a survey done… It came back as expected… long.

Lizzie, Steve, Maisie the cat and their delinquent rescue dog Felix completed the sale on a freezing cold October day, the previous occupants had let the oil run out so they arrived to no oil, no hot water and a broken boiler. It was too cold to stay in the cottage, so it was another week before they eventually moved in but despite the less than cheery start, “it was home as soon as I’d unpacked. It’s true what they say, old houses really do wrap their arms around you and seem to ooze appreciation for anyone that shows them love and respect”.

The cottage is dated to the end of 15th century so has plenty of history. It used to be the old store in the village and the extension (currently the snug) is where the stores were, with access from the road side of the house. Lizzie and Steve have discovered a myriad of interesting features including a huge pargetted wall dating from Tudor times; they have also exposed some of the old wattle and daub and later lathe plaster areas and created little windows around them to keep some of the history on show. Their greatest find was 3 old Tudor shoes which they discovered in the bread oven when moving in. Lizzie assumes that they were found in the living room chimney when it was renovated and opened up and are Apotropaic symbols which were historically used to ward off evil spirits, or possibly also used as fertility symbols.

The cottage had gone through numerous changes over the centuries with each owner adapting it to make their own home, thankfully each change has still preserved the history of this beautiful cottage and although Lizzie and Steve are making their own changes to make the cottage work for them, they are careful to protect and enhance the history of the property. So far their jobs have included repairs to the roof and both chimneys, extensive repairs to outer walls, building a workshop and gym and adding a gravelled fire pit area. Upstairs walls have been taken down to extend a room and work is under way to create a new water connection to enable a bathroom move: “It’s a never ending list that is still very long”!

The cottage décor has been very organic, it’s really evolved over lockdown. I was sent to work from home very early on, so very quickly realised that I needed the cottage to be a calm and neutral space. As much as I love dramatic colours in other peoples homes, it just doesn’t make me feel settled in my own home. I read somewhere that when considering the décor of a room, you should think about how you want to feel in that space, and then work from there. It’s a rule I live by now!

I don’t have a specific style, but I do sway towards vintage, rustic pieces and like an eclectic mix of décor of neutral tones. Design inspiration wise, I take inspo from many designers and mostly from other interiors account on Instagram, as well as Pinterest.

Lizzie’s Country Cottage Necessities include “A good fire and a supply of woolly jumpers…. It gets flipping cold in the winter!”. As is evident in all these beautiful images, Lizzie is very careful with her choices of calming colours and home accessories: “I never have anything in the house that I don’t absolutely love”. It is these qualities that Lizzie has employed to set up her new business www.theprimitivehome.co.uk, redundancy forced Lizzie to to take stock and decide what she would really love to do which she says has been a blessing in disguise as it’s given her the time to focus on the cottage and the drive to set up her own business (a small online homeware shop which will be launching soon).

Lizzie’s dream house would be a rambling cottage or Georgian farmhouse with beautiful, uninterrupted views of the countryside. A large, mature garden with lots of little nooks to get lost in and a river at the end of the garden, so that she can jump on her paddle board every morning and go for a little adventure! I suspect that given how beautiful Lizzie and Steve have made this cottage, it will be a very long time before they leave this gem behind – what greater advert could you ask for when setting up a new homewares company than this stunning cottage? A calming oasis of history and modern country living.

To see more of Lizzie’s beautiful home head to https://www.instagram.com/cottage.on.the.corner/

Thank you so much for such a beautiful write up Rebecca, we’re honoured to be featured. ❤️

Rebecca Lovattreply
– In reply to: Lizzie

Aw thank you so much for agreeing to be part of it!!! Your cottage is just a dream, it is so lovely to feature people who have worked so very hard to bring these cottages up to date whilst preserving their important history. You have the most amazing eye and style. It is a very very beautiful home xxxx

Rebecca Lovattreply
– In reply to: Lizzie

Aw thank you so much for agreeing to be featured – your cottage is truly stunning (even if you still feel like you are in the middle of a renovation – it doesn’t look it to me!!) xxxx

I was so surprised to find your beautiful blog and even more surprised to see Lizzie’ and Steve’s home. It is a beautiful cottage I can honestly say it is really like the pictures … as I am Lizzie’s step Mum. Myself and her Father have shared many fun days and nights of Shennanigains there. Your post is perfect, this has made us both proud, not that we weren’t already.

Oh wow, I love this! I totally agree that a bedroom is only for sleeping and having it as cosy yet minimalist as possible. Its gorgeous!

Rebecca Lovattreply
– In reply to: Sophia

Oh that’s so lovely!! Thank you so much. Rxxxx