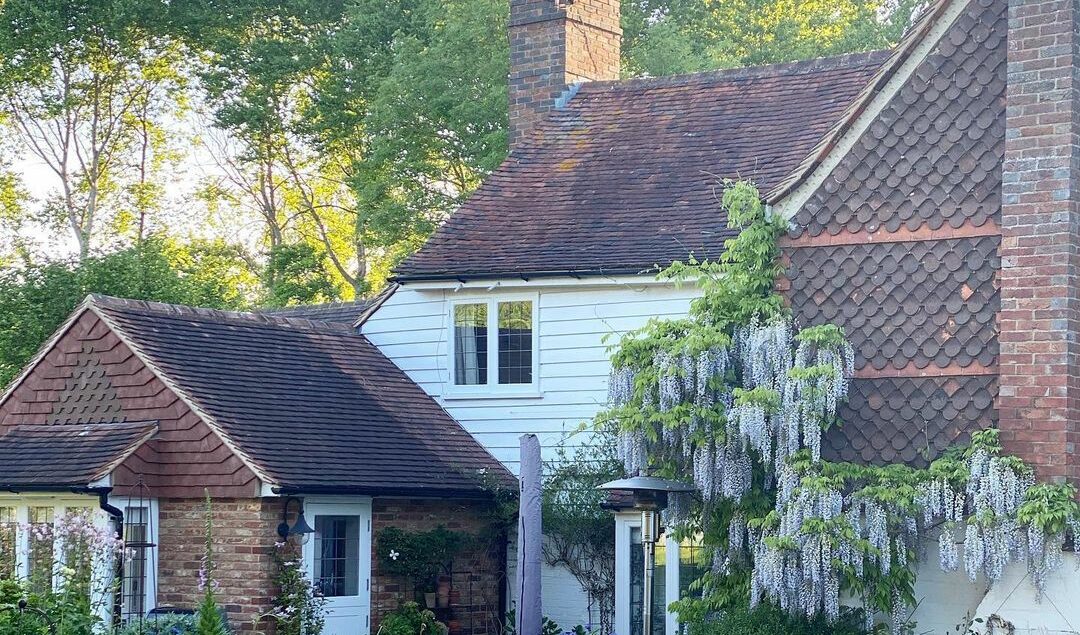 The moment I knew we’d made the right decision was when my lovely father-in-law arrived on moving day and as he wandered around the cottage, he said “this house wraps its arms around you”

Jane & her husband Craig live in this glorious Kent cottage with their 23 yr old daughter Charlie and 21 year old son Sam and their eight year old lab cocker cross Eric. Although this cottage is a traditional Kent cottage with tiled roof and pantiled walls, there are a wealth of similarities between this cottage and my own. It didn’t surprise me then to realise that Jane is also a crazy romantic at heart, tissues at the ready for her next comment: “we also had Flo (another lab cross) who sadly died a year after we moved in. She’s now buried under a magnolia bush in the back garden and the lovely neighbour who helped us bring her body back to the cottage for burial bought a hanging metal snowflake (we lost Flo the week before Christmas) which now hangs all year round above her old bed in the living room”. I warned you! This cottage is full of white and light and simple, beautiful touches but Jane’s romantic soul fills every room with cushions, florals, rustic textures and small parcels of nostalgic gestures.

The oak beams are one of the more delightful features of the property. They are all original in the main entrance hall, living room, upstairs hall and two of the bedrooms. The living room has two upright beams in the middle of the room which we believe separated the two original cottages.
Other lovely features of the cottage include the huge inglenook fireplace with little wood carvings of flora and fauna on the inside and outside and the main entrance of  the cottage which has a gorgeous mixture of original oak beams and tongue & groove panelling.
I love lots of light and the large and numerous windows in the cottage was a huge attraction and quite unusual in a property of this age and character. We have a lovely wraparound garden so no matter where you are in the cottage, you can see out onto different parts of the garden and from upstairs, you can overlook the surrounding fields which, this time of year, are full of lambs.

We’ve always gone for a light and simplistic decor style in all our homes but that style has worked better here than anywhere because of the many original interior features that give structure to every room. Usually you have four blank walls and have to start from scratch but we didn’t have to do that here – the foundation style for each room was already there … whether it was oak beams in the ceiling, walls or even in the middle of the room! … leaded light windows, little interior windows or the quirkiness of not having one level floor or straight line in the entire house. On one section of the upstairs landing, you slide along about a foot if you’re wearing socks because the slope is so extreme!

Jane struggled to leave their beloved family home to move to this cottage, it was where her children had grown up and so many happy memories had been made. They bought this cottage four years ago and bit by bit the magic of this old home has stolen her heart. It was originally two cottages, built in the 16th century. By the 1920s, they were derelict, one cottage had been condemned and the other was “unfit to live in” so a local man bought them both with a vision of “doing the country a service, restoring them and preserving a little bit of history”. Thank goodness for visionaries!

The family bought the cottage from the estate of a deceased elderly lady “Mrs G” and it was “just beautiful as it was” – it didn’t need enormous amounts of decorating or updating as she had kept it in superb condition and had spent a fortune with a local carpenter in creating a bespoke kitchen together with bookcases in the living room, small study and two of the bedrooms. The family just needed to tweak a few areas to suit their needs.

One of the first adjustments that the family made was to take out one of the doors in the kitchen in order to extend the work surfaces and put in a second oven and hob. There was already a beautiful Aga but Jane felt she needed something else to cook on when we they turned the Aga off in the summer. They also raised the ceiling at the far end of the kitchen over the dining table to allow more light and a better feeling of space.

Jane has never followed any specific designers but she has always taken a keen interest in interior design and has developed her own style over the years – simplicity has always been a key factor when decorating, she prefers to avoid dark furnishings or too much fussiness. No where is this more apparent than her dreamy kitchen which even on a dark day is flooded with light and gives a sense of peace and calm with small additions of natural textures to avoid a harsh or clinical feel from the white palette.

Jane has created an unbelievably beautifully serene feeling that runs throughout the house. Her predominant use of white in her decor is softened with natural wood tones, dried flowers, rustic wicker, stone, brick and soft linens.

Jane’s Top 5 Country Cottage Necessities are our top spot necessities with all cottage owners on this blog:

1. “The Aga…  I absolutely love cooking on it although it scared me to death when we first moved in. We had a takeaway the first night and ate in the local pub for the next four! In the end I just had to take the plunge and learn how to use it and I had no idea how easy they actually are to use. You always have somewhere warm in the cottage no matter what the weather and during the autumn and winter, it dries clothes in a flash”.
2. The huge fireplace. The age of the cottage, the complete and utter lack of any insulation and the many nooks and crannies in each wall means the cottage is super cold in the winter.
3. Wellies. When you live in a village where the sheep outnumber the residents, you’re treading through sheep poo in every field and usually along the road as well!
4. Torches. In every room. We’ve had more power cuts in the three and a half years we’ve lived here than in 16 years in our old house!
5. Big jumpers and fluffy socks. Even oil fired central heating, an Aga, an inglenook and a log burner aren’t enough to keep fingers and toes warm on the super chilly winter nights.

Another lovely romantic gesture in Jane’s bedroom is this tiny little heart : “When we moved in, we found a little fabric heart with “mum” embroidered on it hanging in the bedroom which I was going to send on to the family thinking they’d forgotten it. I then realised they’d probably left it there deliberately as a way of keeping mum in the house that she loved so that little heart hangs over my dressing table. Mrs G is still in that bedroom in some little way”.

It seems that this beautiful old cottage has inspired the souls of many of its lucky owners: from the villager who could see past a condemned building to grown up children who leave a precious token to Jane and her family who have treated this home with hearts full of love and respect (and immaculate taste!). What a truly beautiful home to inhabit for all ages.

Thank you so much for this beautiful post about our cottage … reading it, made me realise how lucky we are to be it’s current custodians xx

Rebecca Lovattreply
– In reply to: Jane

Oh Jane, that is such a lovely thing to say! The cottage is so lucky to have you xxxxxx